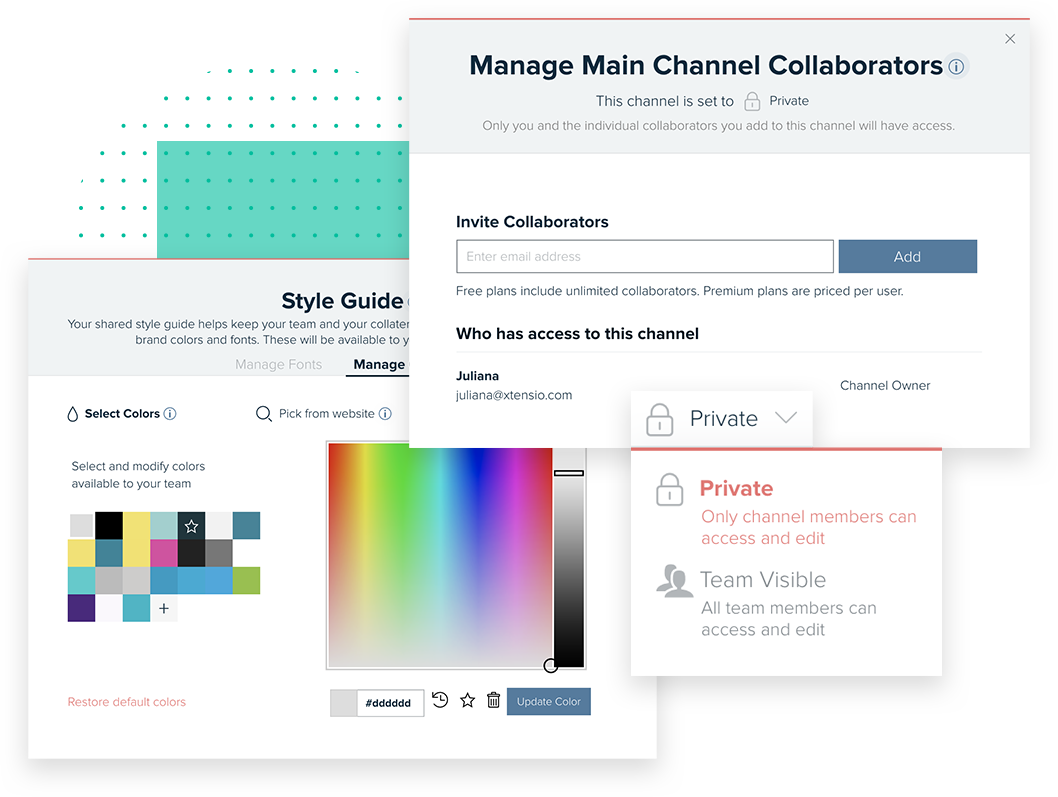 Following the path we set out on in 2018, we continued fine-tuning team collaboration and Xtensio’s position as a business communications platform by optimizing our plans further. Like the earlier part of the year, this meant more and more bug fixes, refinements to team user roles, additions of new features and editor updates.

The major changes to Xtensio’s plans include (yet barely scratch the surface):

Along with refining packages, we added collaboration channels, made optimizations to the editing experience, style guide and simplified team collaboration in general…more details on these later. Generally speaking, a lot of work over the past few months has gone into clarifying Xtensio as a product and where the product fits in the market, much of which has gone on from the backend. We spent the early months of 2019 refining our stack; switching back and forth between customer communications platforms, adding new analytics and onboarding tools, refining tooltips, messaging and general user flows. Of course, there were bumps and bugs along the way that we had to clear up. But overall, it’s been a productive and positive few months!

During the last quarter of 2018, we built, implemented and refined collaboration channels. This feature answered to teams who wanted to collaborate on groups of folios on their team workspace. Collaboration Channels allow for versatile dashboard organization and easy team collaboration.

Since folios can be tagged in multiple channels, this project touched on a lot of team collaboration and sharing settings that took us on a deep dive into some different user flows.  Here’s a quick overview of what collaboration channels can do:

Following the addition of the Team Style Guide and custom fonts, we added a custom colors feature. Team owners and admins can customize the shared color palette and default color by picking from a website (yours or a client’s) or by adding colors individually. This is another step in keeping brand continuity across team deliverables.

After focussing a lot of time on team collaboration, we turned our focus more on the editor towards the beginning of 2019. This included making some optimizations and improvements to clarify features that were already in the editor, and gearing up for a more intensive optimization to the editor.

Along with these updates to the editor, we began refining our onboarding and activation efforts more. We optimized and implemented the help center in the app. And we launched a recurring webinar series, which you can watch here.

Along with differentiating our plans, adding new features and optimizing the editor, we also made some UX optimizations and bug fixes that went along with these other updates.

How to share your work in 9 different ways with Xtensio

Try any template for free. No account or credit card required.